Showing posts from December, 2015
Show all

SECTOR VOICES: The Future of Education - Navigating the space between educational paradigms 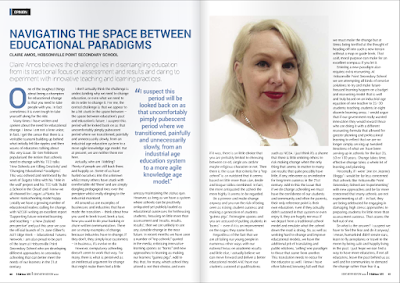 This post was originally published in Education Review: SECTOR VOICES 2015 One of the toughest things about being a champion for educational change is that you need to take people with you. In fact sometimes it is even tough to take yourself along for the ride. Many times I have written and spoken about the need for educational change. I know I am not a lone voice, in fact I get the sense that there is a veritable tsunami building up behind what initially felt like ripples and then waves of educators talking about this very issue. People like Sir Ken Robinson have popularised the notion that schools need to change with his TED talk ‘How Schools are Killing Creativity’ and ‘Changing Educational Paradigms’ . This was echoed and reinforced by the work of Sugata Mitra with his ‘Hole in the wall’ project and his TED talk ‘ Build a School in the Cloud ’ and I know we all cheered for that Logan LaPlante for whom Hackschooling made happy. Locally we have a growing number of educat
Post a Comment
Read more
More posts